Plov is a central Asian dish made mostly from rice is cooked in a seasoned broth, called zirvak (Uzbek). Depending on the region it may also contain meat, fish, vegetables, pasta, and even dried fruits. In the east, plov is almost a daily staple but at the same time is served for special events like a wedding, funeral, child birth etc.

Uzbek plov is one of the cornerstones of Uzbek cuisine. They have a dozens of different recipes and methods to make this dish. During the Soviet Union period, the Central Asian versions of the dish spread throughout all Soviet republics, becoming a part of the common Soviet cuisine. Uzbek plov commonly uses lamb or horse meat but can be substituted  with chicken or wild game.

Plov is usually cooked in a kazan (thick-walled cast iron, aluminum or copper dish) and cooked over an open fire. Oil is also very important and the best mixture is some sort of vegetable oil (sunflower, sesame or Cottonseed oil for example) and animal fat (like lamb or goat). Also most important for great plov is carrots and the type of rice used. In Uzbekistan they use yellow carrots for example. Uzbek plov differs from other preparations in that rice is not steamed, but instead simmered in a vegetables and meat stew (zirvak), until all the liquid is absorbed into the rice.

When plov is ready, it’s usually presented as a small mound and topped with a head of garlic used when cooking. Along the edge garnish with vegetables like tomatoes, cucumbers and onions.

Plov is one of the favorite dishes in our family, tender chunks of meat, fluffy rice with lots of aromatic flavors and spices, it’s so delicious even on the next day! 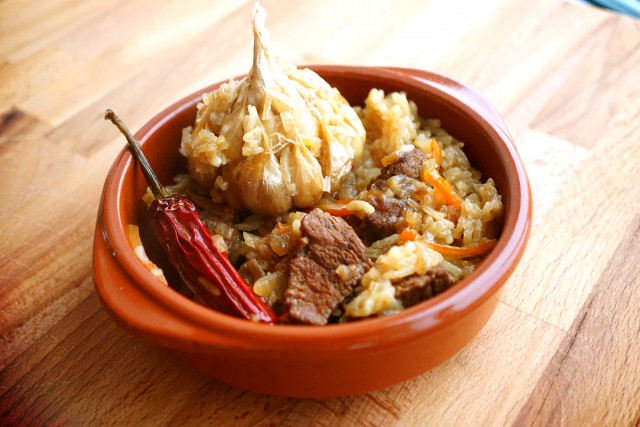 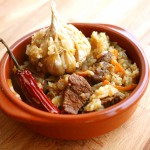 Plov is a central Asian dish made mostly from rice is cooked in a seasoned broth, called zirvak (Uzbek). Depending on the region it …