Paella is a national of Spain, particularly in the Valencia area, made of rice, saffron, and additionally seafood, chicken, vegetables and sausages. Traditionally paella is served on Sundays or on March 19 which is St. Joseph Day. There are several versions of the origins of this dish, the first derives from the Latin word “patella” which translates to pan. Another explanation stems from the Arabic word “remnants” since it was  invented by servants of Moorish kings who ate the remains food after the Arabs, collecting the leftovers together and cooking with rice. This explanation accurately reflects the features of this dish, since it combines together many different ingredients not normally found together – fish, meat, seafood and sausage.

The paella is cooked in a special pan and is usually served in this pan as well. At home of course you can just use a regular frying pan.

Saffron is an important ingredient of paella which gives the rice a yellowish tint. It’s expensive but a little goes a long way. Its best to use bomba rice but other short grain rices will work well too.

Paella with Chicken and Chorizo Recipe 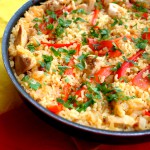 Paella is a national of Spain, particularly in the Valencia area, made of rice, saffron, and additionally seafood, chicken, vegetables …