Vietnamese Pho soup is a nourishing meat or chicken broth soup with rice noodles. Importantly this soup also contains herbs, chili pepper, and lime.
Pho soup is a popular street food in Vietnam. In the South they eat the soup for breakfast and sometimes for lunch and the north of Vietnam consume it at any time of day. The soup itself is different in the north and south. For example in the north, the noodles are wider, the broth is spicier, and contains more green onions as well as served with vinegar, fish sauce and chili paste. Whereas in the South, more fresh herbs are added and it has a sweeter taste.

Pho is made from different kinds of meat, mostly beef and chicken. Classic pho soup made by simmering beef bones, which is boiled for several hours with the addition of roasted onions, ginger and various spices such as anise star, cinnamon, coriander, cardamom, cloves. Put the spices in a cheesecloth, it makes it easier to get them out later.

Serve Pho in a deep dish with rice noodles, pouring clear beef broth with thinly sliced ​​pieces of beef (in the south of Vietnam also can be meatballs). Chicken pho is prepared with the same spices, like beef, except the broth cooked with chicken bones, chicken meat and organs (heart, gizzard).

Garnish the soup with green onions, cilantro, mint, chili peppers, or hot and spicy pastes, slices of lemon or lime, Thai basil and bean sprouts or onions with vinegar – all of these additives can be put on a separate plate on the table, so everyone can season the soup to their taste. 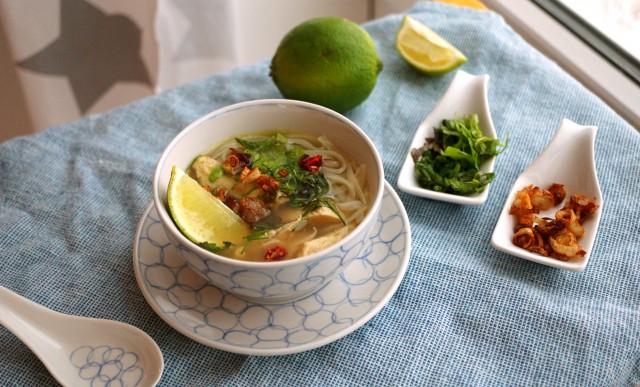 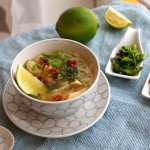