Chebureki are basically deep-fried stuffed patties. It’s a traditional dish of Turks, Mongolians and Crimean Tatars, and popular in the Russian Caucasus region along with Romania, Uzbekistan and Tajikistan. Usually the stuffing is meat such as lamb or beef mixed with pork, onions and various spices, but you can also use vegetables, mushrooms, cheese, or even fruits.
There are many different recipes for the dough and fillings, but this recipe is one of the most traditional and easiest to make. I added a little garlic powder to the meat. You can add different spices depending on your taste, but don’t add too much, or it will overwhelm the flavor of the meat.
Onions keep the chebureki filling moist, but also I use a little water or sometimes kefir or low-fat yogurt. You can also grate 1 tomato on a coarse grater and add to stuffing instead of water. 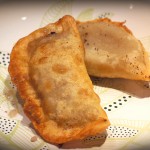 Chebureki are basically deep-fried stuffed patties. It’s a traditional dish of Turks, Mongolians and Crimean Tatars, and popular in …