I remember when I was a child my mother cooked these peppers a lot for us. My brothers and I never ate the peppers, which is not very surprising for kids, but the stuffing was great with sour cream! By the way, for the stuffing you can use chicken instead and for vegetarians there is an option to just stuff with rice but be sure to reduce the cooking time 30-40 minutes. For the sauce, I use my canned tomato sauce, which I usually make in the fall from tomatoes and herbs from my garden. It includes tomatoes, basil, thyme, oregano and garlic. Some people like to add a little broth in the sauce.

This is another dish from my childhood and a bit like Golubtsi I did earlier. 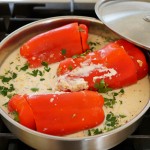 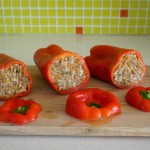 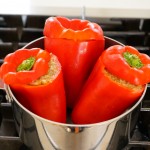 Stuffed bell peppers is a popular dish in Bulgarian, Romanian, Moldovan and Azerbaijan cuisine. The main ingredients are bell peppers, …