This deep fried crispy waffle tube-shaped shell, with sweet cream cheese and chocolate inside is a traditional Sicilian dessert and very popular in Italian-American cuisine.  Usually containing ricotta cheese, but you can add mascarpone cheese or whipped cottage cheese to it as well.

I thought about making cannoli for a long time and finely it happened! I ordered stainless steel cannoli forms for baking and they were Very helpful. I read different recipes on how to make cannoli and here’s my recipe of very delicious cannoli.

A couple of tips:
Typically, the Marsala wine added to the dough, but I didn’t have it, so I replaced it with amaretto. You can use any other almond liqueur.
It’s better to knead the dough  with the hands. The dough is very hard. After kneading, roll out the dough and cut into circles, but because of the hard dough it’s kind a difficult to roll it, so I used our “tortilla press” and then rolled it out again.
Cannoli with cream can stay for a couple of hours at room temperature, longer and the cream will begin softening the shells. The cream can be stored in the refrigerator for a few days, so refrigerate the cream until it’s time to fill cannoli shells. It’s best to fill right before serving. The rest of the cream close tightly and keep in the refrigerator. The shells can be stored at room temperature, tightly packed in a bag.

I got a little bit more cream for filling left, so I used it for another dessert “Krumkake”,  a Norwegian waffle cookie made of flour, butter, eggs, sugar, and cream. Or you can serve it with pancakes, waffles and etc.

And yet, there are many varieties of cannoli preparations, as in any traditional family recipes. For example, crispy wafers covered with chocolate completely or only on the edges, dipping them in melted chocolate, or coat the shells with icing powdered sugar. The edges of the filling can be decorate with chocolate, crushed nuts, dried fruits or candy, orange peel or lemon. 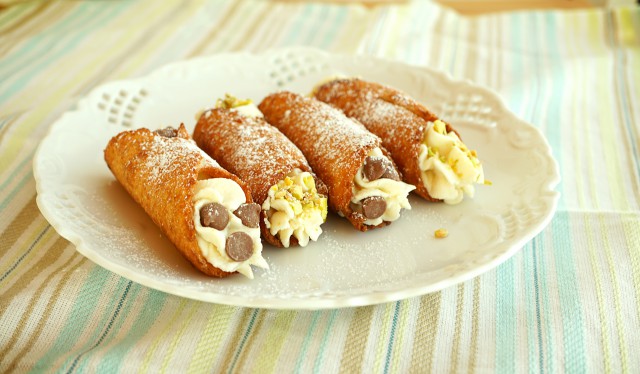 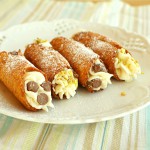 This deep fried crispy waffle tube-shaped shell, with sweet cream cheese and chocolate inside is a traditional Sicilian dessert and …